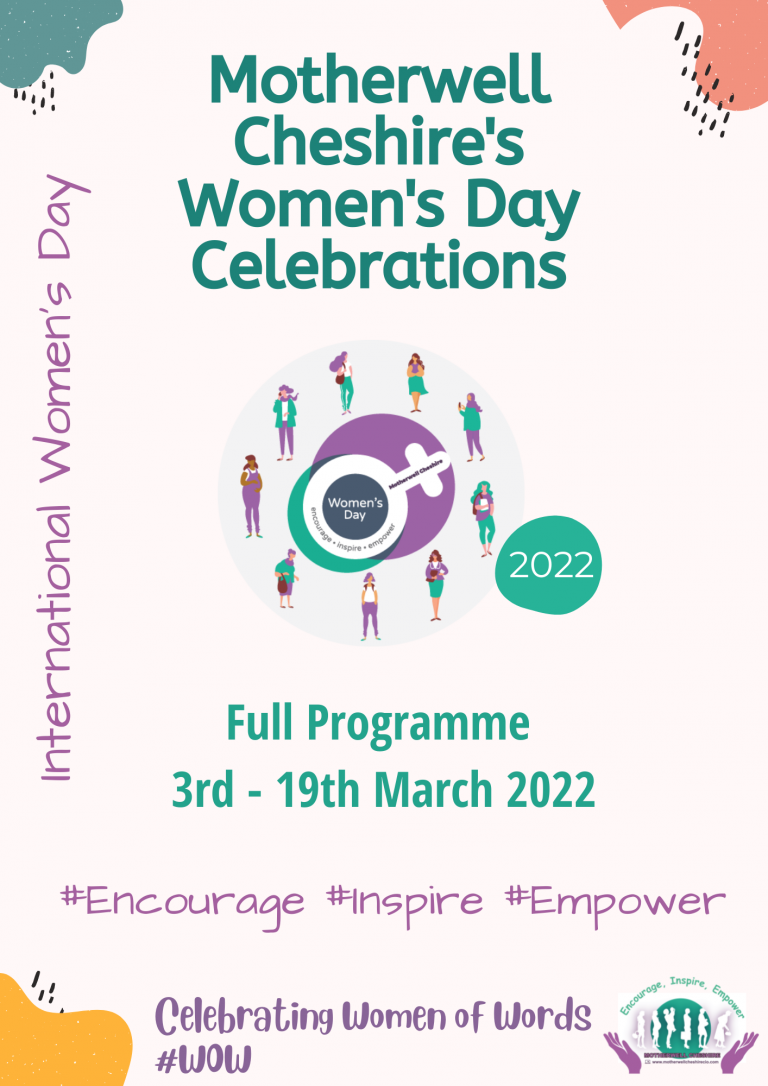 We are very excited to be once again deep into the planning stages of our annual Women’s Day celebrations. Having been virtual in 2021, we are looking forward to returning to Crewe and Winsford in person on the 5th and 19th of March 2022 respectively. We will be bringing you two wonderful, interactive celebrations complete with marketplaces supporting local traders.

However, one big difference this time is that we will also be offering a full programme of talks will be virtually, allowing you to watch from the comfort of your own home and to ask questions, or to watch back at a time convenient to you.

We are back with our face-to-face events!

For all the details…. 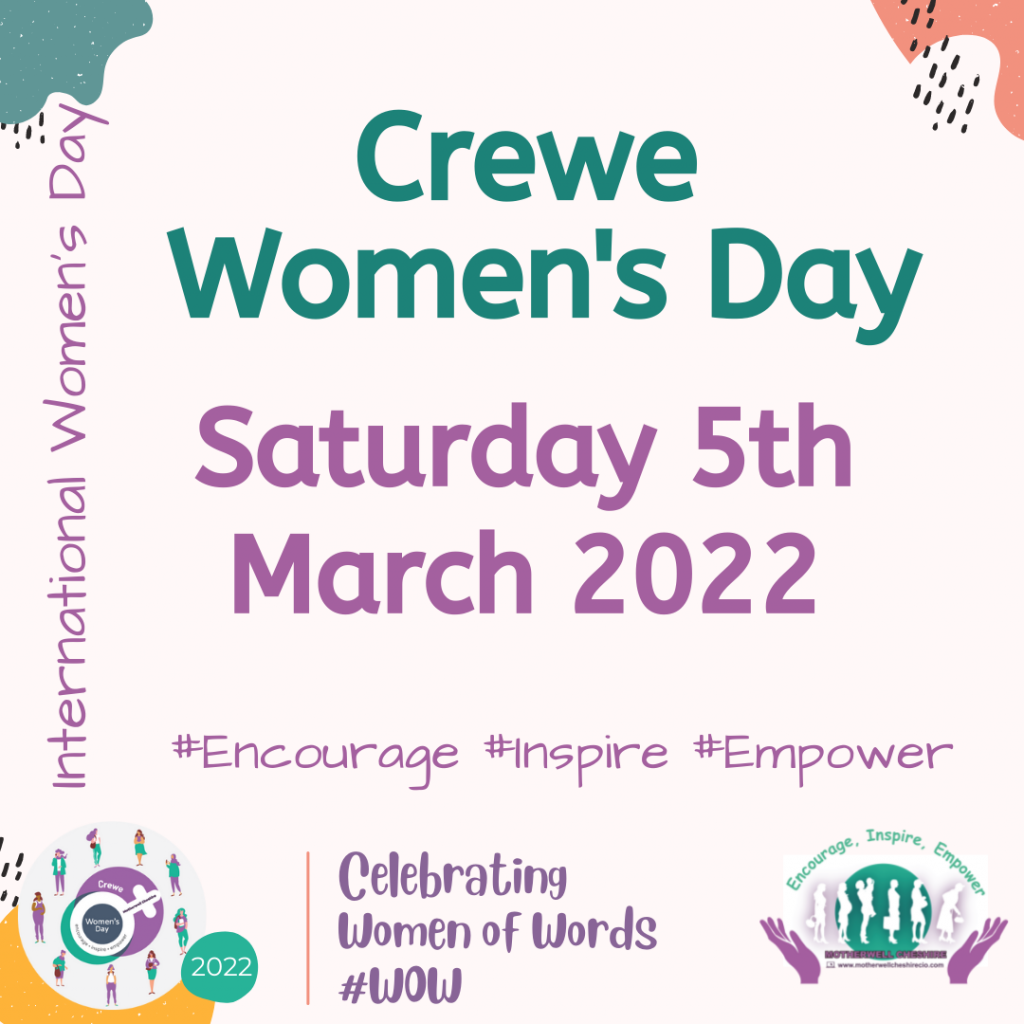 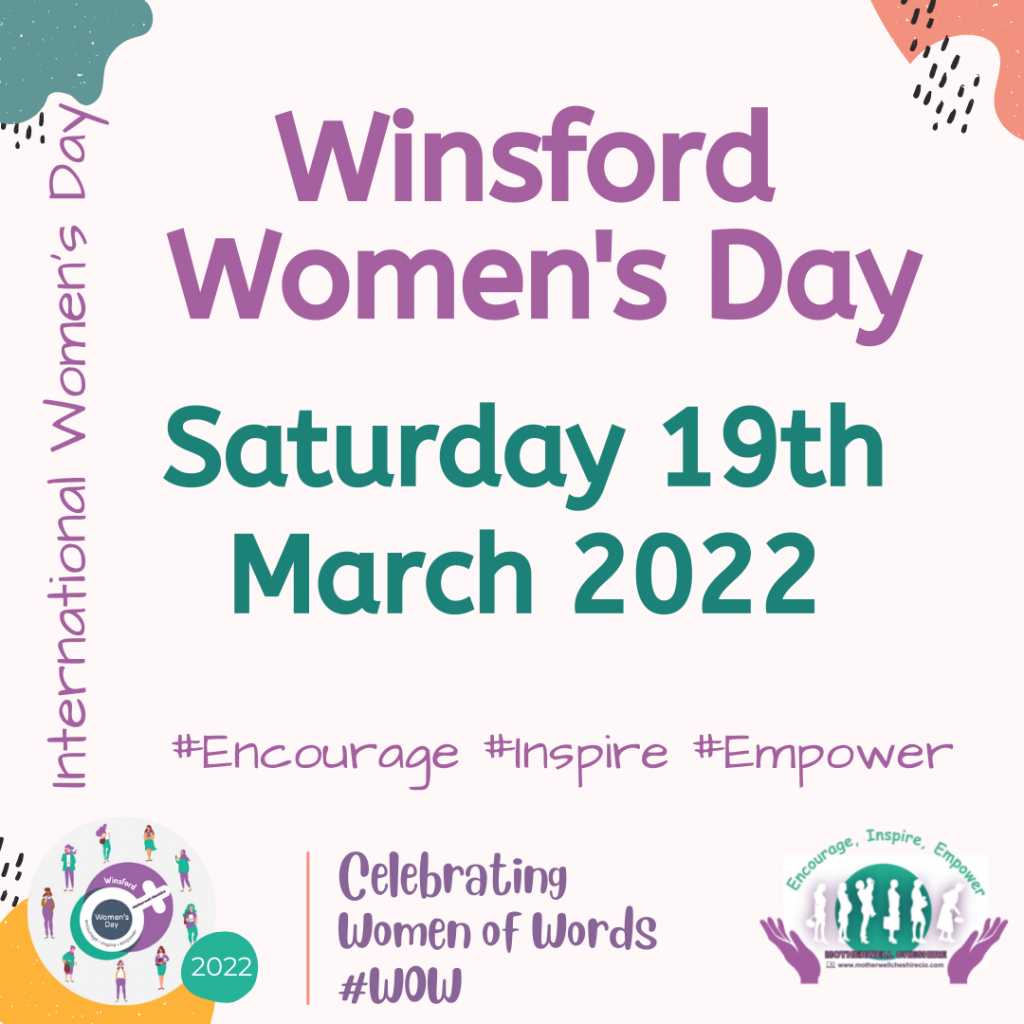 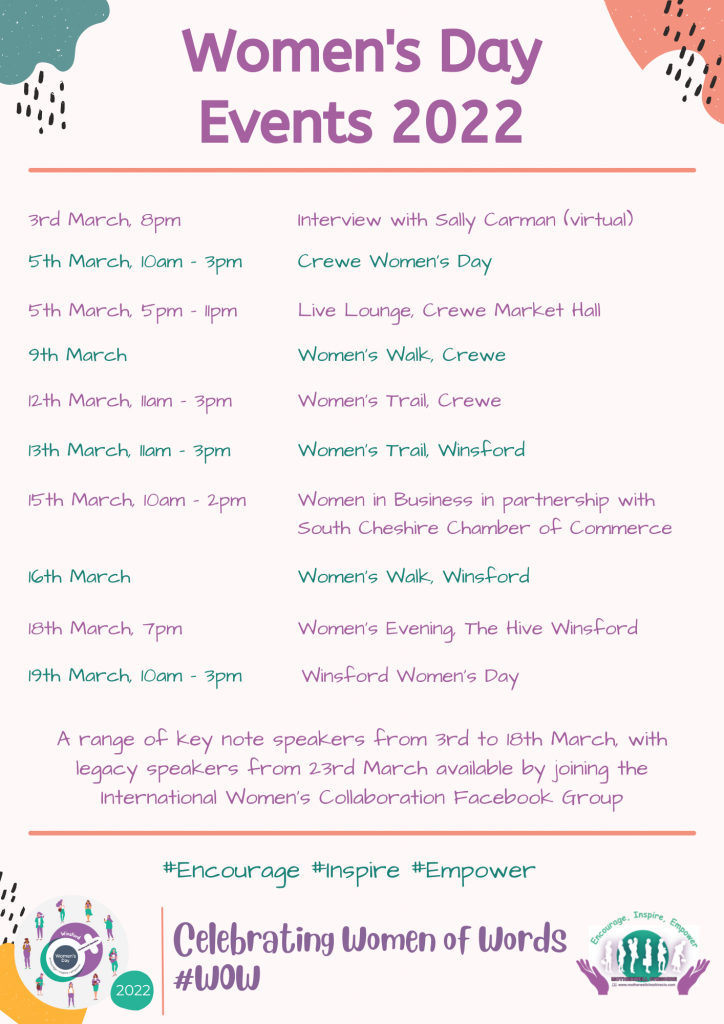 We have a range of wonderful speakers lined up for you. you’ll be able to access all the talks completely free of charge by clicking here and joining our Facebook group where they will be streamed. Most of our speakers are live, so you will get the chance to ask questions after their talk.

Sally Carman, of Coronation Street fame (Abi) – will be speaking to our CEO Kate Blakemore and answering your questions.

As well as an actress, Sally is also patron of Motherwell’s Believe project.

Sally will be live at 8pm on 3rd March. 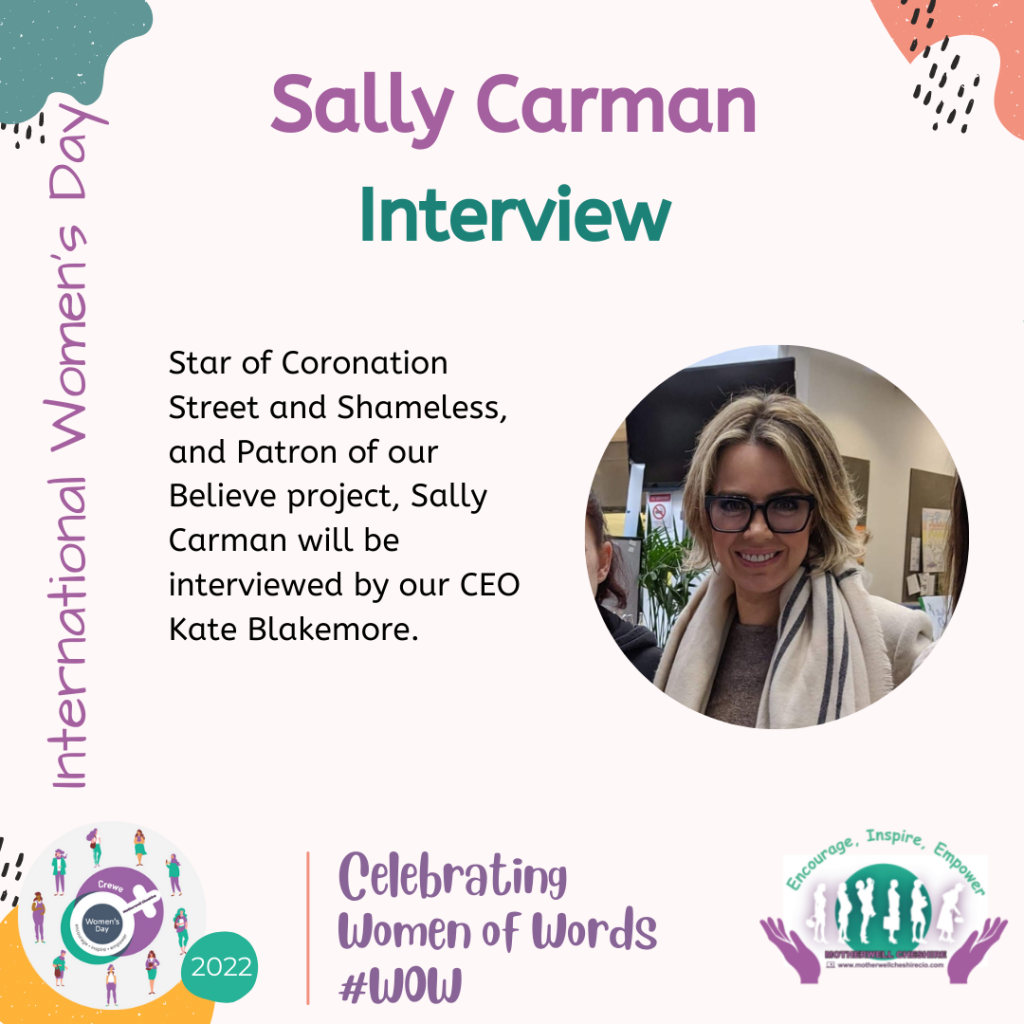 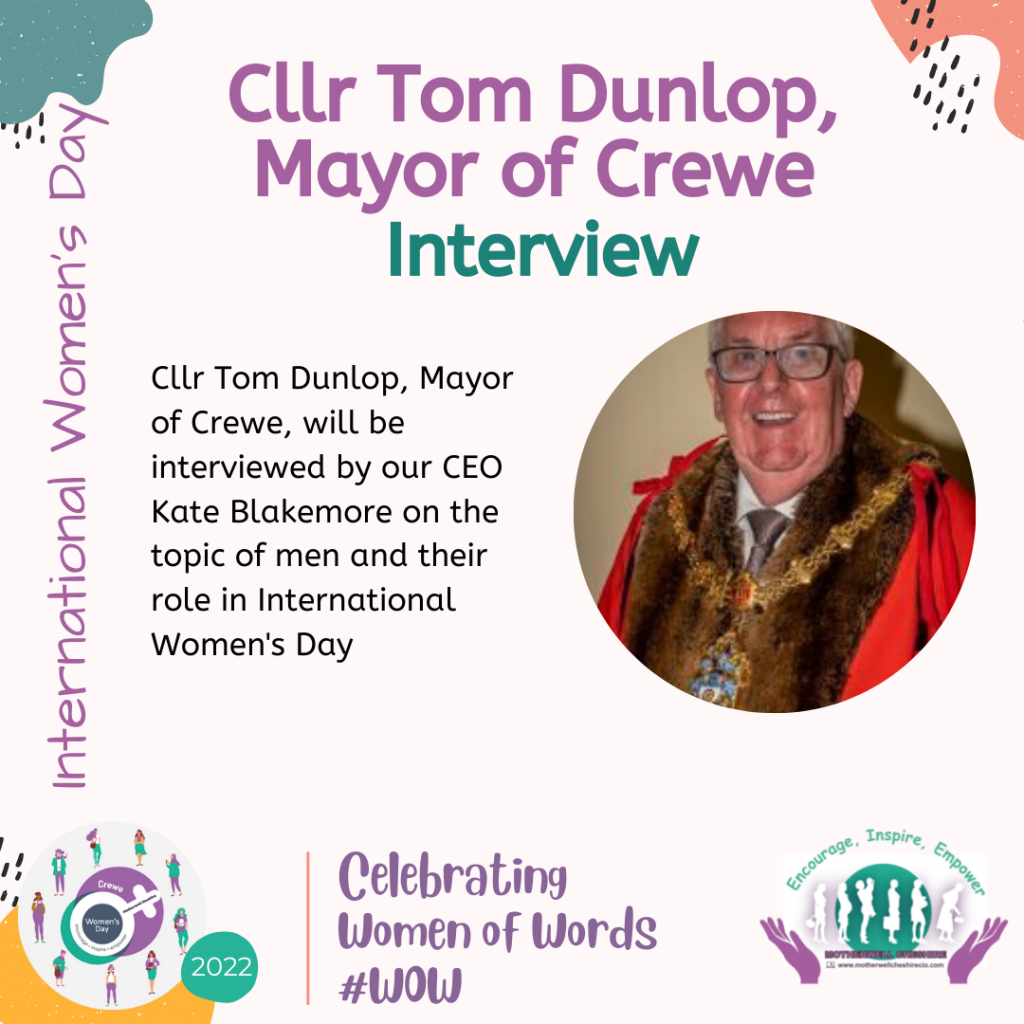 We look forward to being joined by Crewe Town Mayor, Tom Dunlop, in a live interview with our CEO Kate Blakemore. He will be discussing topics such as men’s role in Intranational Women’s Day as well as answering some of your questions.

Tom is a Councillor at Crewe Town Council and has been the Town Mayor since May 2021. Part of the role of the Mayor is to act as an ambassador for the Town of Crewe and its people and Tom regularly attends events and activities, as well as visiting schools, businesses and organisations.

This interview will be live at 6.30pm on 4th March.

Lisa will be live at 7pm on 7th March. 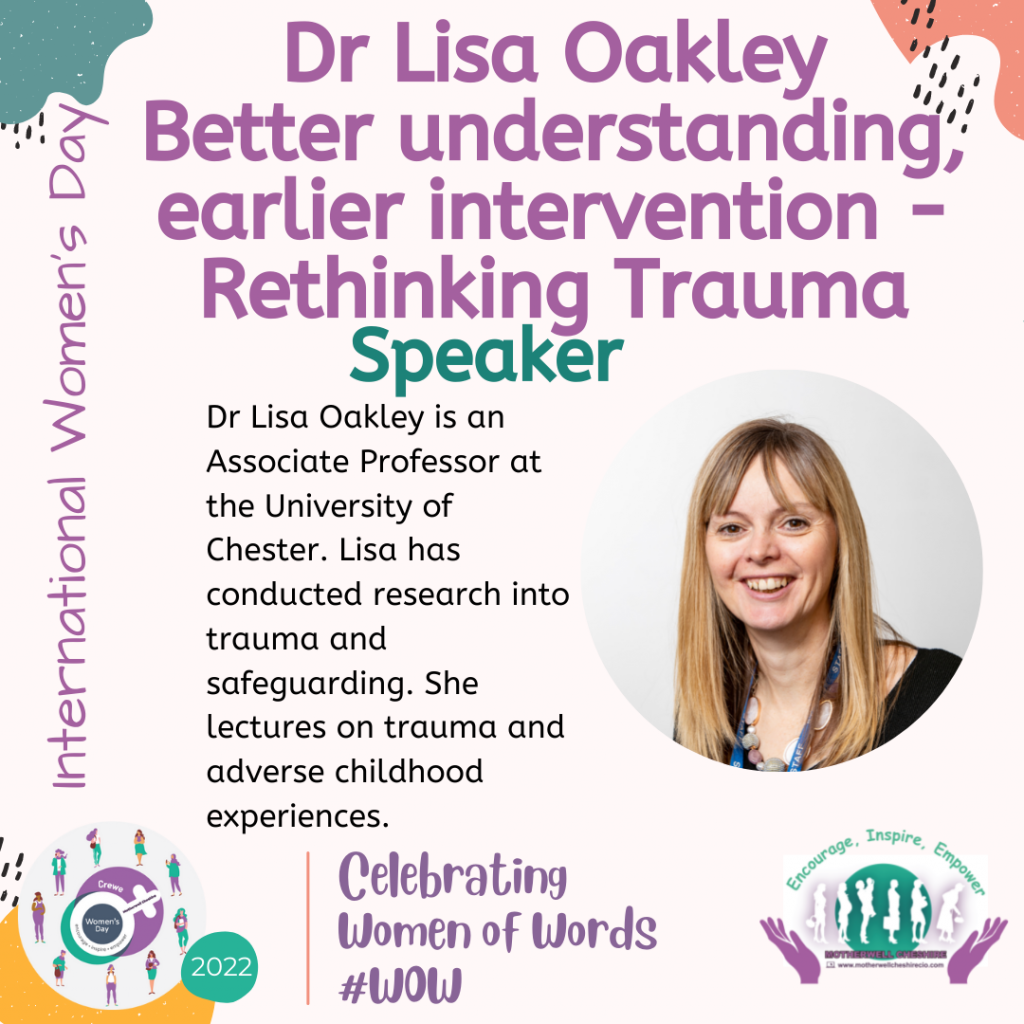 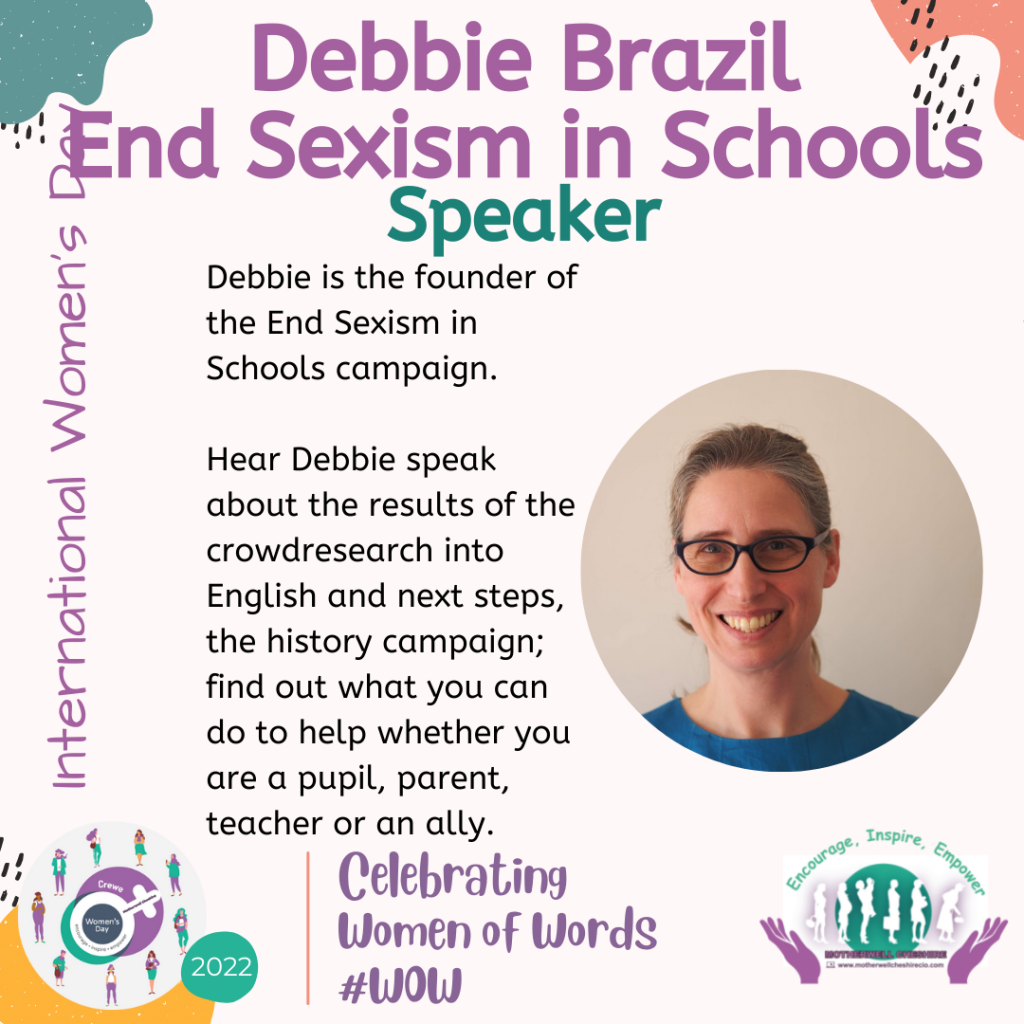 Debbie is the founder of the End Sexism in Schools campaign.

She is a parent of two teenage boys who, between them, have attended four primary and secondary schools. She came across everyday sexism in all these schools but whenever she tried to raise it, she was met with denial, empty rhetoric or downright hostility. As Debbie’s sons have gone through the school years, she has watched patriarchy reproducing itself.

Since schools are not large corporate institutions, but sit within local communities Debbie thought they must be easier to change, but has in fact discovered that schools are largely unaccountable with very little scrutiny. Debbie found allies through the Women’s Equality Party and together they have kickstarted this campaign to End Sexism In Schools. The campaign is independent of WEP.

The campaign is currently focusing on quantifying sexism in the secondary school curriculum and has been running crowdresearch to create evidence of just how few schools choose to read books authored by women or with female protagonists. The campaign will then work to develop female-focused curriculum material including collaborations with authors. The team are now getting started on the history curriculum.

Come and hear Debbie speak about the results of the crowdresearch into English and next steps, the history campaign, and find out what you can do to help whether you are a pupil, parent, teacher or an ally.

Trudie Newhouse is 49, married to Ian and has a 16-year-old daughter. She lives in Lymm, Cheshire and works from home, as an ISO Standards Consultant.

In March 2020, Trudie contracted COVID-19 and has since suffered with daily headaches and migraines triggered by artificial light. Her condition was difficult to diagnose during the pandemic and may have been exacerbated by
other women’s health issues.

During the worst of her illness, Trudie could not leave her bedroom for weeks, which began to affect her mental health. She continues to live with Photophobia.

Trudie hopes to inspire others who may be on a similar path with her story. She chose to volunteer to help others in her community and continue with a commitment to raise £1500 and take part in Strictly St. Roccos 2021, which considerably improved her physical and mental wellbeing, as well as raising a combined £80k for the charity.

This talk and accompanying photos show her journey onto the Strictly
dancefloor.

Trudie will be live at 7pm on 14th March. 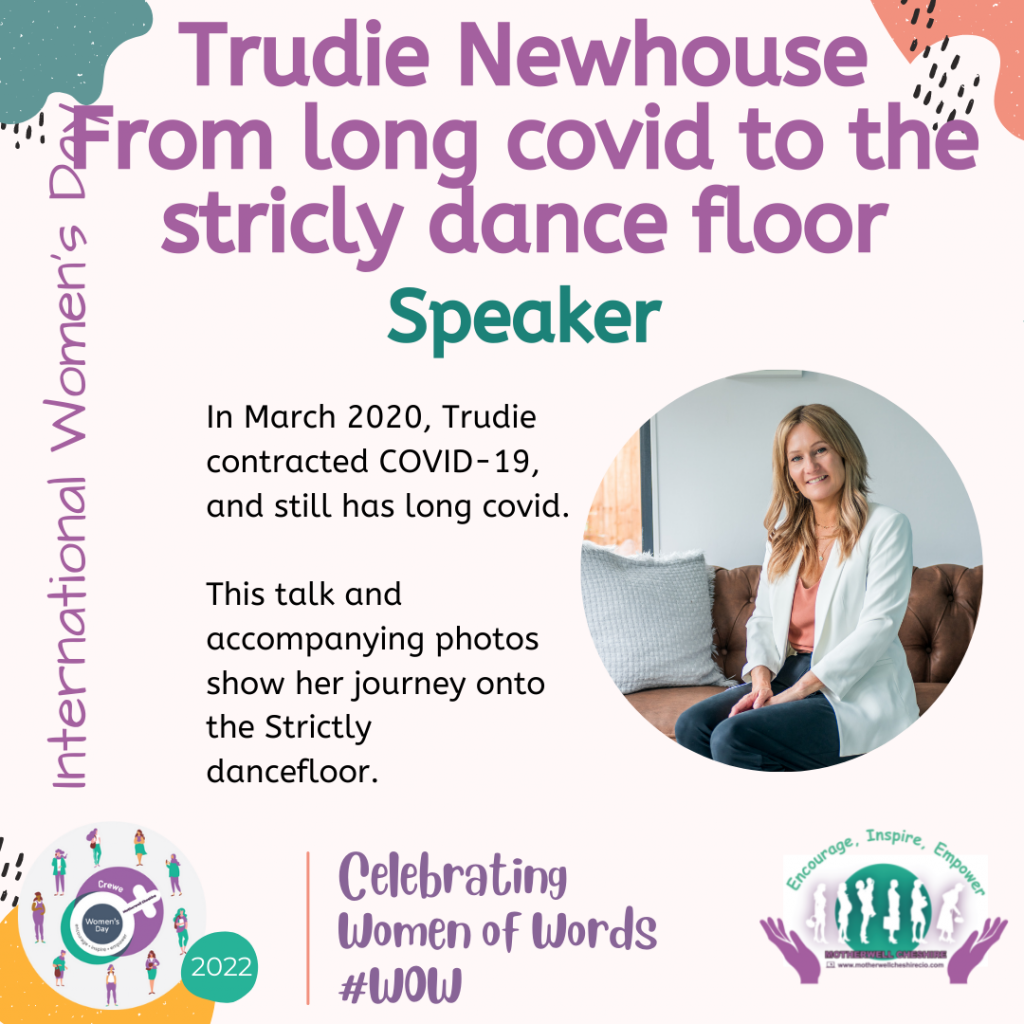 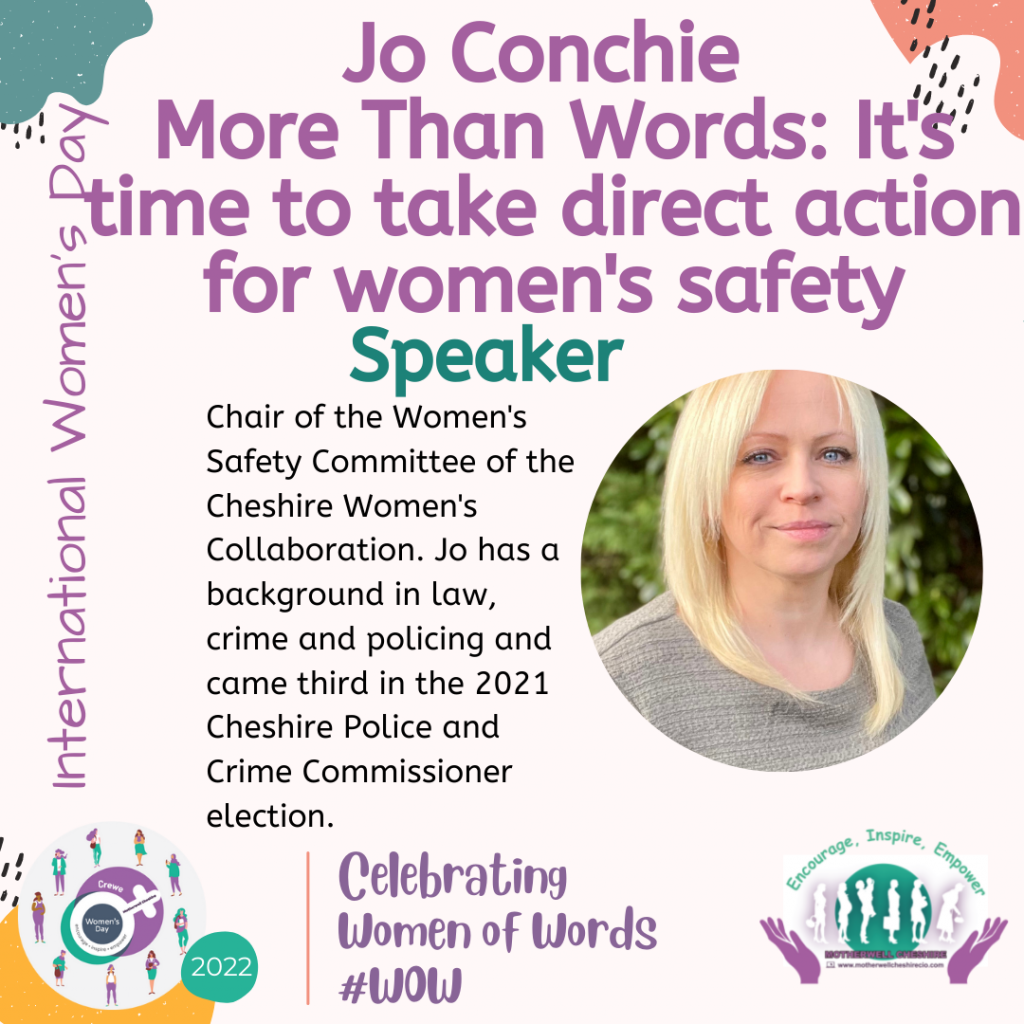 Jo Conchie is Chair of the Women’s Safety Committee of the Cheshire Women’s Collaboration. Jo has a background in law, crime and policing and came third in the 2021 Cheshire Police and Crime Commissioner election. She is also a community campaigner fighting for justice and equality across society, and recently received an honour for her community work in the Queen’s New Year Honours List 2022.

We have events taking place around Crewe and Winsford.

More to be added! 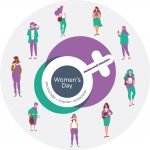