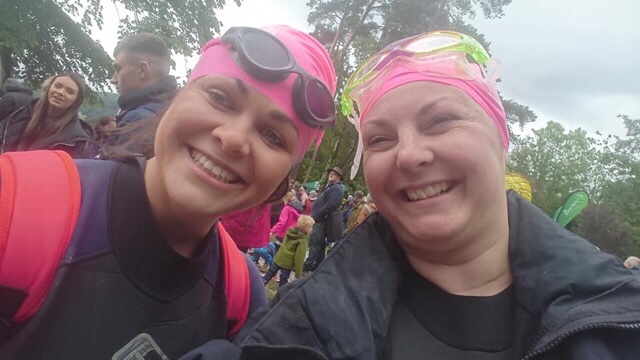 With just a few days into January 2020, I’m using the time before I’m back at work to reflect on the last few years.  It occurred to me more than ever what a positive impact that setting challenges has had on my life.

It was during a pretty low point in my life,  that Kate, from Motherwell, encouraged me to sign up for their fundraiser – a 1 mile outdoor swim in the summer of 2018.

I’d not swam since being at school other than on holiday and the odd trip to the swimming baths.  In all honesty, it bored me a bit and I just didn’t like the effort involved – getting in to the changing rooms, getting changed, being cold, swimming (boooooring!), showering, make-up back on, drying my hair and on and on.  It was just laborious.

I felt like I wanted to help Kate as I believe in what Motherwell stand for.  It was the only reason I agreed to take part.  Looking back two years ago, I had no idea of the extent to which swimming would help me climb out of that rut at the time.

First of all, I knew I needed to train.  I was overweight and a bit unfit at the time and had no idea how far I could swim, or even how many lengths 1 mile was!  I started by working out that 1 mile was 64 lengths of a 25m pool.  I had a membership for Total Fitness, so my first swim was breaststroke (the only stroke I really knew), with head above the water.  I managed four lengths before being out of breath and having to stop.  This wasn’t going to be as easy.…

I don’t remember really enjoying it at first, but I do remember knowing that I had to keep going and had to build up, otherwise I’d never complete it.

One barrier that stood in the way was that I developed a strain in my neck, so I started to have swimming lessons in order to sort out my technique.  The lessons gave me a real kick – a weekly commitment which quickly improved my technique and therefore, pace.

As I started to see progress, I started to enjoy what I was doing.  During a very dark time in my life, it became the only time in the week where I felt positive.  I had something I looked forward to.  Do you recall the sound inside the swimming baths??  I’d walk into the pool are and would hear that echoing sound.  As soon as my head went under the water, the sounds and pressures and thoughts of that day, week, year, would disappear. It was quiet and peaceful.  I’d be in the swimming zone.  Focussed.

The more pleasure I got from swimming, the more I’d do it and eventually I started to enjoy other things in the same way – yoga and later running.

Although the beauty of swimming was being alone and happy, I started to build a network of friends in this community as I started to step into swimming outdoors.  Kate and Motherwell set up the network for us all to be there to support each other and introduced us all to Dianne Parish who really coached us through the journey, answering any questions we had and setting us up with organised and safe swims.

Born out of the this community challenge and shared goal, came friendships.  Friendships provided support and encouragement, pride and fun.

Without wishing to over-exaggerate this experience, it did really change my life.  Without me ever realising, signing up to this challenge got me back on track.  It also re-introduced me to swimming at a different point in my life and gave me the opportunity to fall in love with the sport. I heard stories from other people taking part in the challenge that inspired me to want to raise lots of money to support families suffering from infant loss (the project that this challenge was aimed towards).

In 2019, I took part in the Great North Swim, again to raise money for Motherwell with the same group of people.  This was a real step up from the previous challenge as it was alongside thousands of other swimmers and rough water in Lake Windermere.  It was brilliant though – so much fun!

I initially took part in this challenge to support Motherwell and the wonderful service that it provides.  As time went on, the challenge gave me so much more than that – it gave me a purpose; a reason to exercise; a positive outlook during training; a sense of pride and achievement upon competition and a new-found love for swimming.