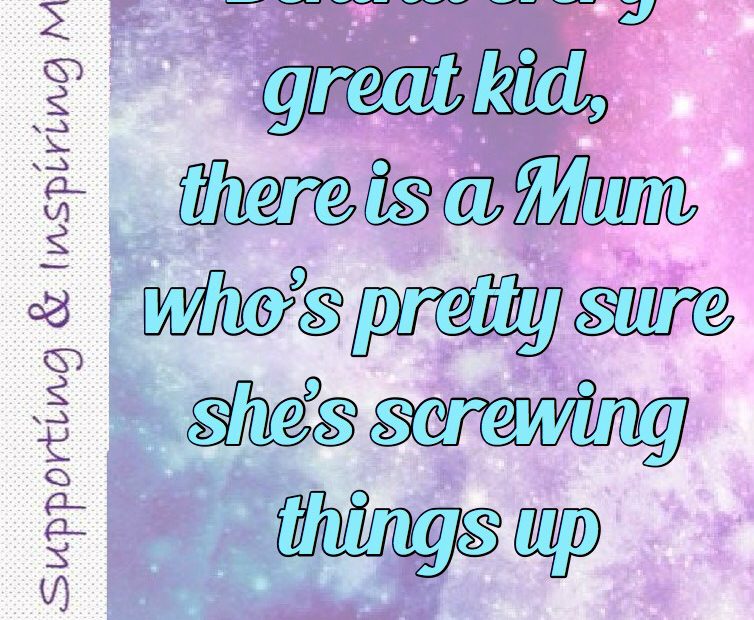 Nothing or no-one can quite prepare you for what it is like to become a parent. I mean, sure, you know that you’re going to have this little person/people who are going to rely on you for at least 18 years, but it feels like a little part of your heart is walking around somewhere else on the Earth, and you worry about that part more than anything else in the world. One thing I wasn’t prepared for was mum guilt. You’re made to feel guilty over anything and everything. If you bottle fed your baby, you didn’t give them the best start in life because ‘breast is best’. And if you breast fed you didn’t give them enough chance to bond with anyone else cos only you could feed them. It seems like nothing we can do is right. Living with a mental illness can make all of these thoughts become so much more intense. It starts with one little thing in your head and snowballs.

If you’re already living with low self esteem, just thinking about going to those baby groups/soft play centres can be a worrying time.

You weigh up the fear of being judged – over your choice of clothes, your baby’s clothes, the pram you use, the way you feed your baby. These thoughts can turn into excuses not to go, whether you’ve had this experience or not, bringing the circle around to mum guilt – feeling guilty for not going to the group in the first place. This can lead to isolation, the less you get out, and then it can have a negative impact against your mental health. It can become a vicious circle to break.

Things came to a head for me one day, and I felt nothing I did was right, that I needed to make things better for my son. I was worried about going out because of how I look and how it would impact on him, and because I’m overweight, would I be judged for taking him to McDonalds, or if I took him swimming would I be jibed at for my weight, and even to the point would people feel I was incapable of being a good mum for having problems walking distances and needing a walking stick. I felt he was missing out on things because of my low self esteem, and the self doubt about myself and my abilities.

In that moment, I decided I would find out. So I asked my 5 year old, ‘If you could change something about mummy, what would it be?’  I was expecting a list of things he wanted to do, that he wanted from me to make me a better mum. He sat and thought for a few seconds, and then he said, ‘Nothing. I love you just the way you are.’ I choked back the tears and gave him the biggest hug I could. From that point, I realised that all this guilt I was carrying, it was my guilt that I put on myself. No one was forcing me to feel that way, or even putting the pressure on me. My son is happy, he has a roof over his head, food in his belly, and clean clothes on his back.

He doesn’t care that he was bottle fed and not breast because I was on medication. He doesn’t care that he didn’t have home grown organic vegetable purées when he was weaning, or that I used disposable nappies, or even that he had a dummy until he was 3. None of those things matter in the grand scheme of things. He is happy, he is healthy, and most of all, as he likes to tell me over again, he loves me, and he knows I try my best. That’s all we can do, and all I encourage him to do. When he’s worried about school, or his swimming lessons, I reassure him, ‘as long as you try your hardest, and keep trying, it doesn’t matter how long it takes’. I think we all need a little reminder of that some days.

So to all those mums worrying over the decisions you make for your children, don’t sweat the small stuff. If you’re trying your best, and your child is happy, healthy, fed and clothed – you’re doing a good job.