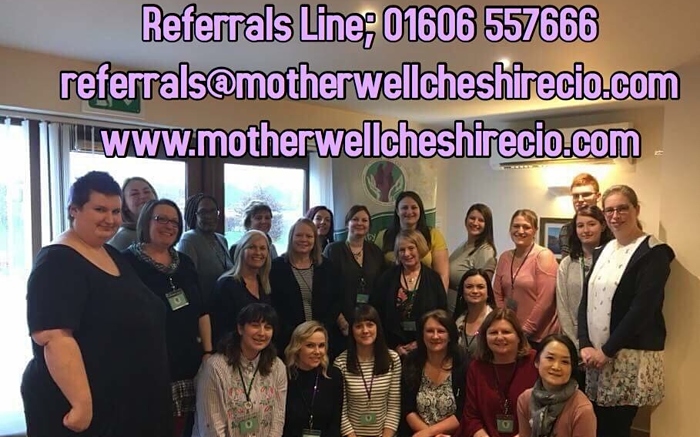 A South Cheshire charity which supports mums with mental health problems, has launched a new service to help those coping with the loss of a child.

The idea came from Motherwell Cheshire founder Kate Blakemore, after she suffered the trauma of a miscarriage earlier this year.

Motherwell provides mental health services for mothers along hte mothering journey, from pregnancy, all the way to the menopause and beyond.

It offers a mix of 1-2-1 counselling and peer support groups and workshops to help women deal with anxiety and depression and the effects it can have on your life.

Kate wrote a blog about her experiences, highlighting the lack of aftercare and support for women who have had to deal with losing a child.

And it led to her idea for the new Cherry Blossom Infant Loss Support Service.

Speaking of her own experience, Kate said: “I am not blaming anyone for the lack of after care and when I was in the hospital everyone did the role that they needed to and I was dealt with professionally at all times.

“However what lacked at times (by some and not all) was empathy and after care.

“When I was discharged no one come to explain anything, I was not handed any information about what I needed to do once at home, what to expect physically, emotionally. No future appointment was discussed or offered.

“I am not saying this is the role of the already full to capacity NHS, but it could be their role if there was an organisation that they can refer people to.

“What this journey has shown me is the importance of quick after care and relevant, accurate information.

“We already work with many women who have suffered still births, birth traumas and miscarriages, but I am aware that weeks have had to go by before a referral is made to us.

“What I want to work on is information leaflets provided by the hospitals with all the information that they may need once leaving home. With local support they can call if and when needed.

“I am a strong believer that information empowers people even in their most vulnerable times, and most importantly knowing that they have appropriate support networks to support them through the sad times.”

Volunteers completed a sponsored Open Water Swim at Manley Mere in July to raise £3,577 to help fund the new service, which will help women who have suffered miscarriage, medical termination, ectopic pregnancy and still birth.

It will offer peer support groups, as well as 1-2-1 counselling if needed and home visits. People can self refer by emailing referrals@motherwellcheshirecio.com or calling 01606 557666.

On October 6, Motherwell will hold its annual Glitterball Women’s Only event at Nantwich Town FC, with proceeds going into the charity.

Kate, who runs a show on The Cat FM radio, was shortlisted as a finalist at the North West Charity Awards for the Charity Director of the year, while the Motherwell team was finalist in the Fundraising Team of the Year category.